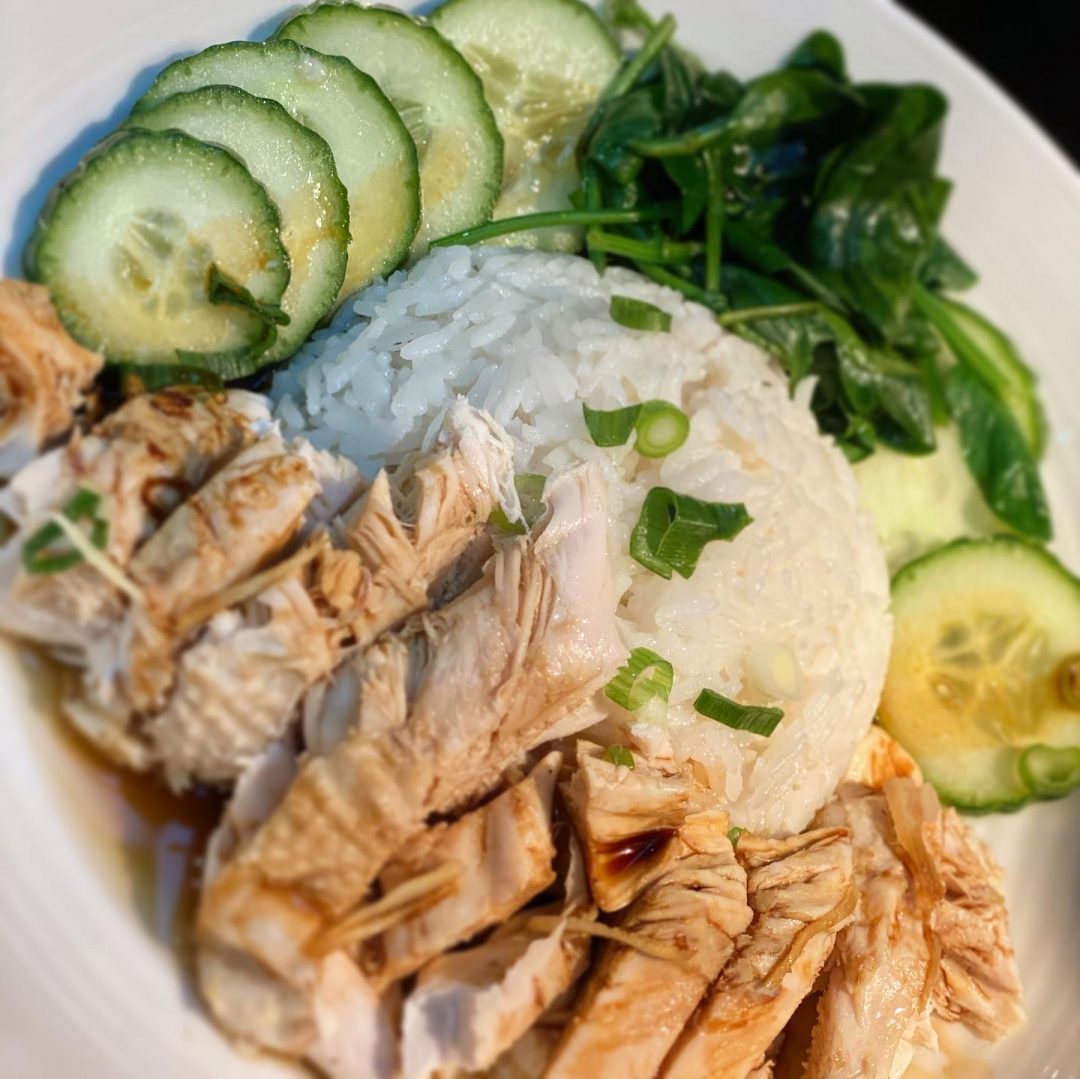 Cut half of the ginger and smack it. You will need this for the cooking broth. The other half should be finely sliced in Julienne style and will be used in the sauce and for garnish. Smack 2 cloves of the garlic and finely chop the other two cloves to use for rice and sauce.

In a large pot, heat up some sesame oil. Add in the smacked ginger, garlic and peppercorn. Fry for 2 minutes until golden brown. Now, put the whole chicken in. Pour in the chicken stock, add a pinch of salt and bring to a boil, then gently simmer for 30 minutes.

Whilst waiting, prepare the sauce. Finely chop some chillies. I usually use bird eye chillies and I don’t remove the seeds. Pending on how spicy you like your sauce, use the appropriate chillies. In a sauce bowl, add all the soy sauces together, then mix in the chillies and half of the finely chopped garlic and some of the ginger (julienne or you can also finely cut it up). Squeeze the juice of 1 lime into the mixture. Leave the sauce to marinade. We will come back to it later.

After 30 minutes of gentle simmer on low heat, remove approximately 1.5L of the cooking broth to cook the chicken rice. Leave the rest on a gentle simmer with the chicken. In a wok, heat up some sesame oil, add half of the chopped finely garlic. Wash the jasmine rice once and it to the wok. Fry the rice for approximately 3-4 minutes. If you have a rice cooker, at this point, transfer the work contents into the rice cooker, add in the cooking broth you have removed (1.5 litres). Add the pandan leaves. Pandan leaves are from a tropical plant, very well known for its fragrance. These are long so you can gently fold it in two and immerse it in the broth. Add a splash of sesame oil and let the rice cooker do its normal job.

If you don’t have a rice cooker, then continue cooking your chicken rice in the wok. Pour the broth into the wok, add the pandan leaves. Bring to a boil, then gently simmer. Check there is enough broth and mix every so often. It should cook within 20 minutes.

Now, check on your chicken. At this point, I like to remove the chicken from the pot and put it into the oven to further cook it. Pre-heat oven to 170C, add a cup or a bowl of water in the oven to keep moisture. Put the chicken into a tray. Pour over sesame oil and add a pinch of ground black pepper and the rest of the ginger that was finely sliced (julienne). The chicken should have been in the broil for about an hour, so depending on the size of the chicken, I would recommend a further 15-25 minutes in the oven. The first 10 minutes in 170C and the rest of the time in 160C. This will help keep the chicken moist and tender.

Taste the broth. If necessary, add a pinch of salt. Now run the broth through a sieve to get a clear chicken broth. You can add vegetables into the broth for a healthy balanced meal like carrots, cabbage or spinach. I prefer spinach because it cooks in a few minutes. Add in the spring onions and coriander leaves.

Take a ladle of the broth (approximately 100ml) and add it to sauces.

Take the chicken out, let it rest for 5 minutes before carving it. My family are not great with bones like the proper Asian style, so I debone most of it except for the thighs, drumsticks and wings. Put the thinly sliced cucumber at the bottom of the serving dish, put the chicken on top. Sprinkle with spring onion and a drizzle of sesame oil.

Serve with the chicken rice, spicy soy sauce and the broth.
大家吃饭! 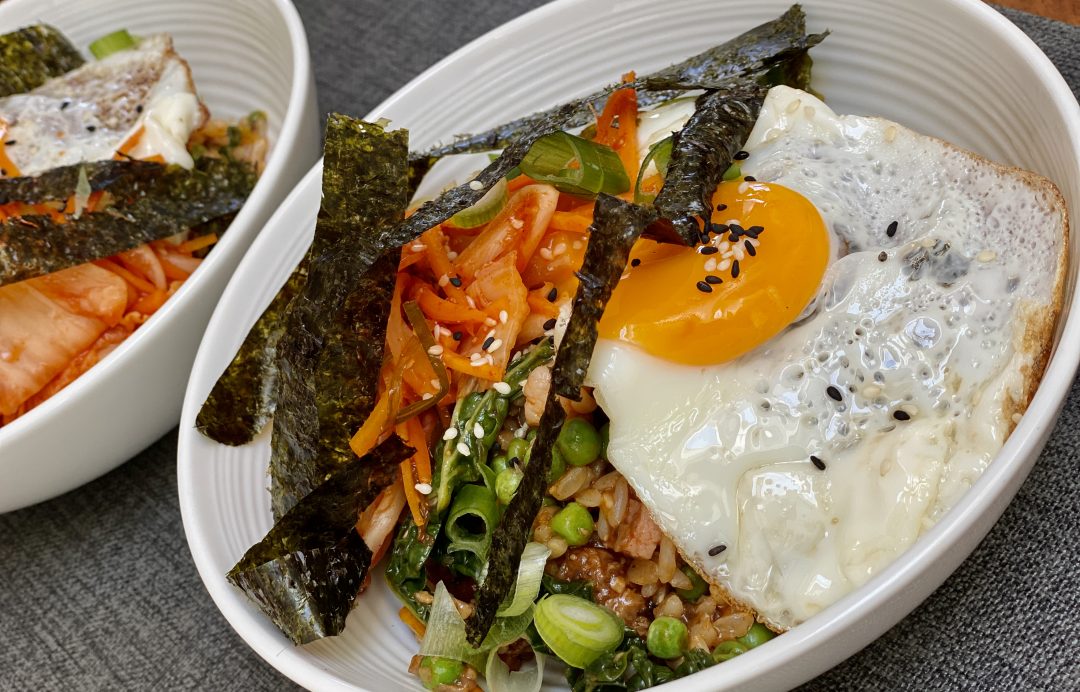 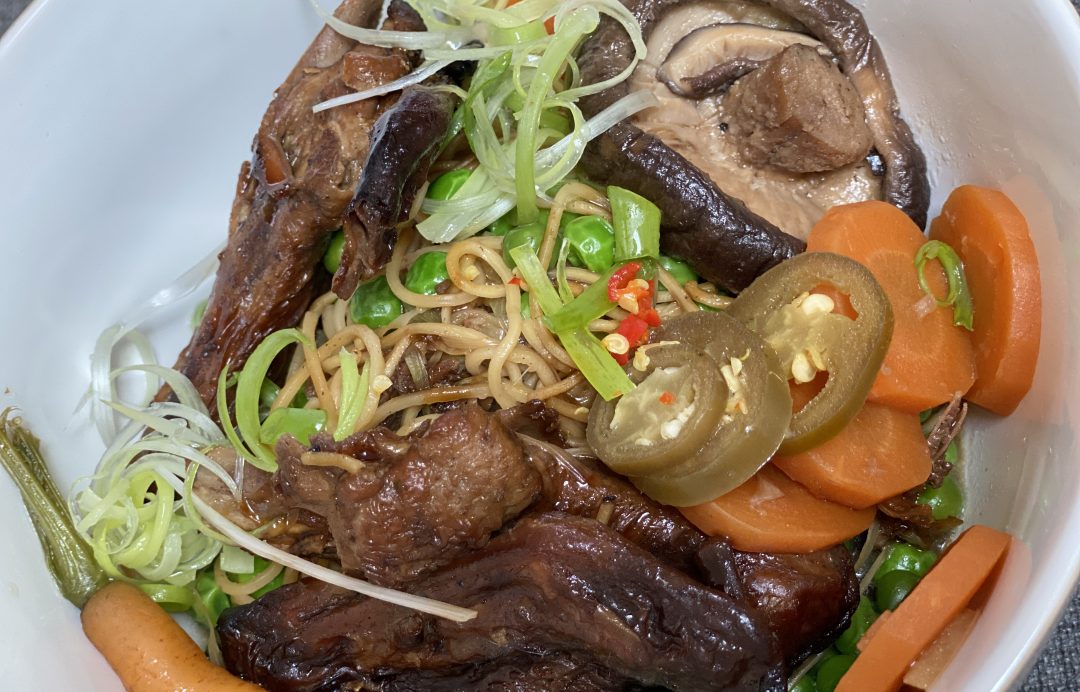 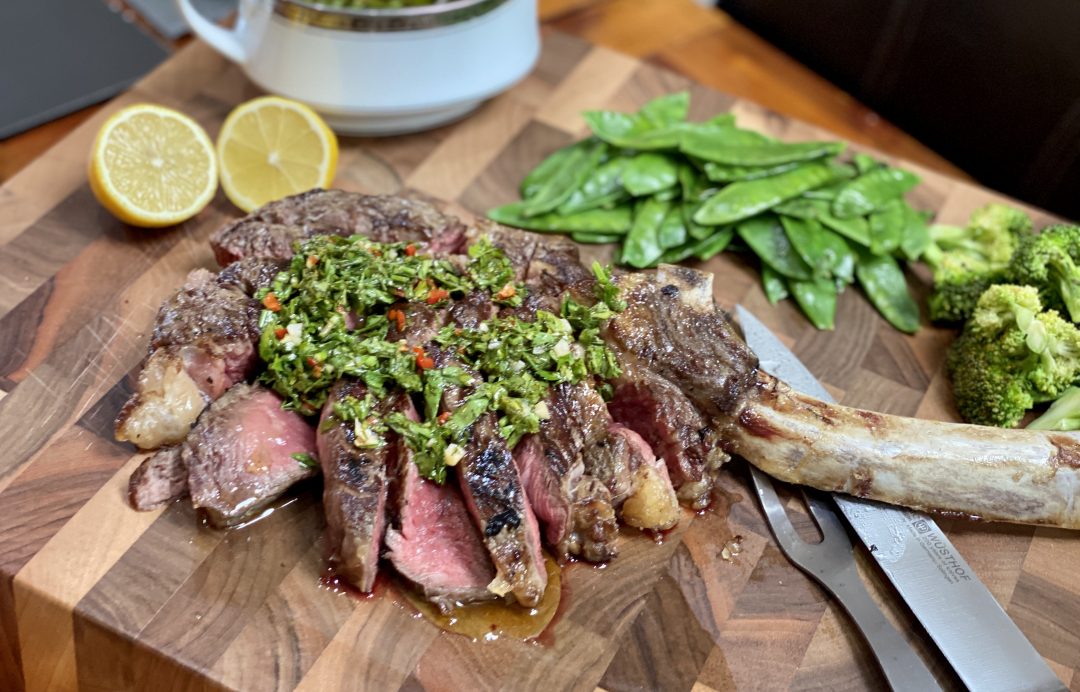